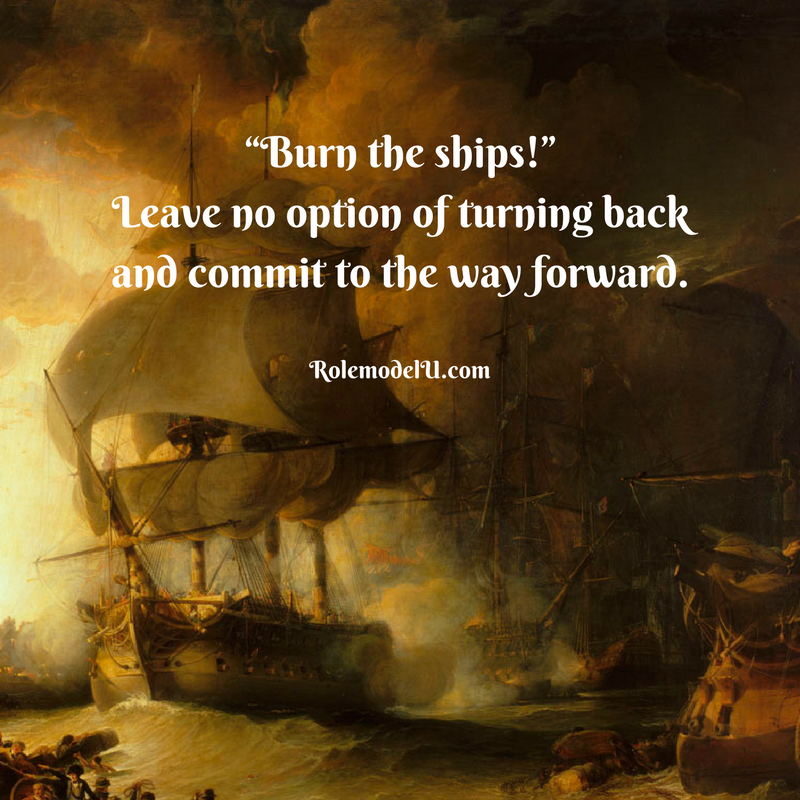 The beginning of a New Year often has us looking back and seeing how God has walked with us in the past and contemplating the year ahead.

We tend to want to hold on to the familiar, the easier path, the old ways....but these often become unhealthy, and even dangerous for us to continue down some paths/have relationships with some people in our lives. When we become aware of these different paths/people in our lives that can hinder/harm us, we may need to "rise from the dust and walk away".

"Burning the Ships" can be SO difficult(maybe even excruciating.)

I don't know about you, but FEAR often has kept me from burning the ships and moving ahead. Fear of rejection, fear of what others will think, fear of being alone, fear of not knowing the future. But, God reminds us that He will never leave us, nor forsake us. He is our source of strength. And He holds the future and will take care of us!!

“Have I not commanded you? Be strong and courageous. Do not be terrified; do not be discouraged, for the Lord your God will be with you wherever you go.” ~ Joshua 1:9

This song came to my mind, as I've been thinking about some past relationships/choices(mainly family) that I have held onto, but have come to understand, have not been healthy,

Burning the Ships also means giving God control of things I don't have control of. The song below, also came to mind.

I pray, Lord, let me know when something/someone is pulling me down/away from Your will and plan for my life. Let me have the strength and courage to give it to You and know that if it's Your will to re-connect, You will open those doors again. If not, let me walk away, 'Step into a New Day', and know that You have purposed this for me and You have my back!! Let me surrender to You everything that I have no control over.
I love You above all else, Lord!! Amen

"Brothers, I do not consider that I have made it my own. But one thing I do: forgetting what lies behind and straining forward to what lies ahead, I press on toward the goal for the prize of the upward call of God in Christ Jesus."

Posted by cairncottage at 11:50 AM No comments:

Fearless in the New Year

Many fun-filled days with mom

My word for 2018 was CHANGE and there definitely was lots of change this past year. Change in our family relationships, change in our plans for the future, change in our responsibilities, and more than anything, change in my self-confidence and how I deal with difficult circumstances!

A new year, a new decade, is now in front of me! How much more will God be teaching me, guiding me, growing me? Honestly, I know, no matter what, God walks with me, so I have nothing to fear! As I continue to learn what it means to be fearless, I pray I can look to the Word of God for the answer!!

Quotes from Fearless Living in Troubled Times: Finding Hope in the Promise of Christ's Return by Michael Youssef

"In times of persecution and oppression, hope endures. Hope perseveres. Hope brings us peace in the midst of trouble. The serene and confident expectation of the return of Jesus Christ, whether his return takes place in the next instant or ten thousand years from now, fills us with a peace that no persecutor can take away." 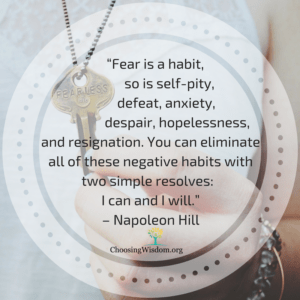 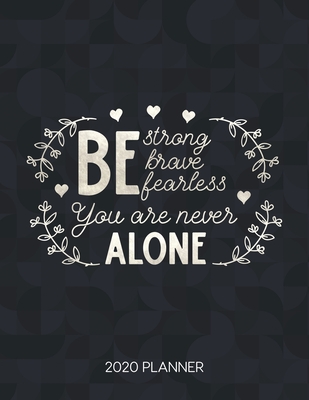 Posted by cairncottage at 6:42 PM No comments:

Render Onto Caesar What Is Caesar's

In my last post, I shared a word I felt God was calling me to claim for 2020.
2019 is not over, but I'm already seeing how the Lord is preparing me for the upcoming year and my faith is being greatly challenged. I keep hearing my new word in Scripture, in devotionals, in songs, and in prayers. My word is

As Christians, we are warned many times in the Bible that we may endure persecutions and hardships of many kinds. We are also told over and over, "Do not be afraid", "Do not fear", and "Fear not."


Jesus was continually put in "sensitive" situations with the people surrounding him. Many people tried to use their authority and power to trick him, blame him, and revile him, but he always stood his ground and was ready to respond to their questions and badgering. In the book of Matthew, twice in a row the local so-called religious leaders tried to attack him...

Matthew 22:15-21, 34-46
"Then the Pharisees went out and laid plans to trap him(Jesus) in his words. They sent their disciples to him along with the Herodians."

“Teacher,” they said, “we know that you are a man of integrity and that you teach the way of God in accordance with the TRUTH.  You aren’t swayed by others, because you pay no attention to who they are."

"Tell us then, what is your opinion? Is it right to pay the imperial tax to Caesar or not?”

"But Jesus, knowing their evil intent, said, “You hypocrites, why are you trying to trap me? Show me the coin used for paying the tax.”

They brought him a denarius, and he asked them,
“Whose image is this? And whose inscription?”

"Then he said to them, “RENDER TO CAESAR WHAT IS CAESAR’S, AND TO GOD WHAT IS GOD’S.”

"And when the Pharisees heard that Jesus had silenced the Sadducees, they themselves gathered together. One of them, an expert in the law, tested Him with a question: “Teacher, which commandment is the greatest in the Law?”

While the Pharisees were assembled, Jesus questioned them: “What do you think about the Christ? Whose son is He?”

Jesus said to them, “How then does David in the Spirit call Him Lord? For he says:

‘The Lord said to my Lord
“Sit at My right hand until I put Your enemies under Your
feet.”’
So if David calls Him Lord, how can He be
David’s son?”

"No one was able to answer a word, and from that day on no one dared to question Him any further."

The Pharisees and Herodians wanted to entangle Jesus over the issue of taxes. If Jesus says they ought to pay, he betrays the Jews who resented the Romans. If he says do not pay, he would be in trouble with Caesar and the Romans. Either conflict could undo him and his influence. The malice in the question springs from envy. Even Pilot knew the Jews were handing Jesus over out of envy. (Matthew 27:18) Caesar’s(the government) influence and our allegiance to them are shaped by God’s superior possession and authority. We render to Caesar(government) the things that are Caesar’s(governments)  as an act of worship to God. (Ephesians 5:22; 6:7) If we don't pay taxes, we are sinning against God.

Jesus’ answer of the greatest commandment is another model of how theological discussion should proceed. The command to love the Lord God with one’s whole heart, soul, and strength was simply a quotation from Deuteronomy 6:5. No man was able to answer him a word,.... They saw the dilemma they were reduced to, either to acknowledge the deity of the Messiah(the truth), or confess their ignorance(and their guilt); and neither of them they cared to do, and therefore judged it to be the
WISEST TO BE SILENT!!.

Jesus, having confounded the great sects of the Jews, proceeds, in his turn, to propose to them a question for their solution. This was done, not for the purpose of vain conceit and triumph, but:
1.to show them how ignorant(and accountable) they were of their prophecies.
2.to humble them in view of their ignorance. They were wrongly confident in their ability trick and scare Jesus into submission.
3.to bring to their attention the true doctrine respecting the Messiah - his being possessed of a character superior to that of David, the most mighty king of Israel - being his Lord, at the same time that he was his descendant.
https://www.desiringgod.org/messages/obey-the-government-for-gods-sake

What a perfect example of how we should address those who come against us, who try to do injustices in the name of "righteousness" and their own made up "laws". We are not to fear, but trust in God's protection and His truth to prevail.

"Do not be afraid of what you are about to suffer. I tell you, {the devil will test you}, and you will suffer persecution. Be faithful, even to the point of death, and I will give you life as your victor’s crown." Revelation 2:10

We are called to be fearless in the sight of evil man's attacks because God is for righteousness and justice! He will not let the righteous be forsaken.(Psalm 37:25)

Instead of fear, we are to turn our hearts and minds to the Lord in prayer. We are to fully trust Him to carry us through. We are also called to love and pray for our enemies...

"But I tell you, love your enemies and pray for those who persecute you," Matthew 5:44

So, today and every day I am saying a prayer....May the Lord also lead you to pray for those who you come across each day in your life. 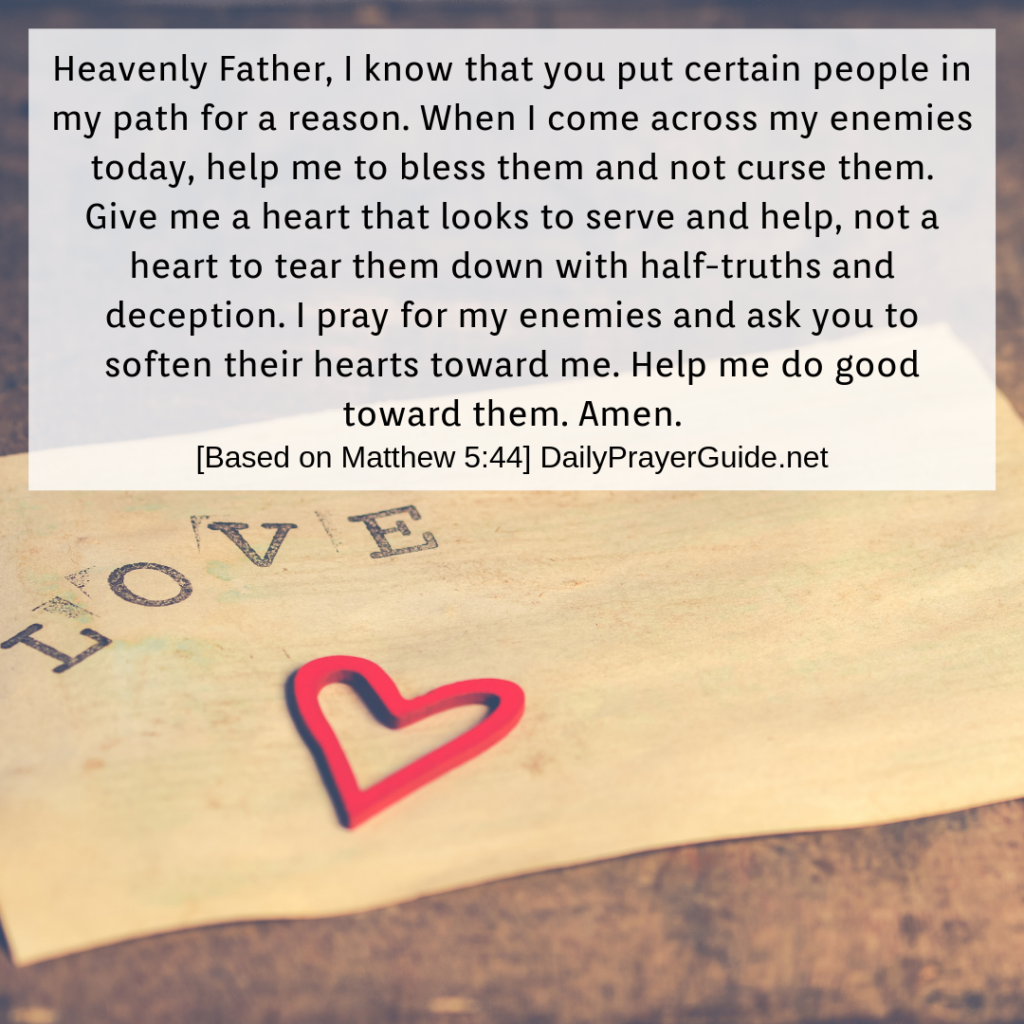 Until next time, may you be
...strong and courageous. Deuteronomy 31:6
in the Lord and in His mighty power. (Ephesians 6:10)

Posted by cairncottage at 7:28 PM No comments:

“One thing you can count on is the way I’ll love you.” 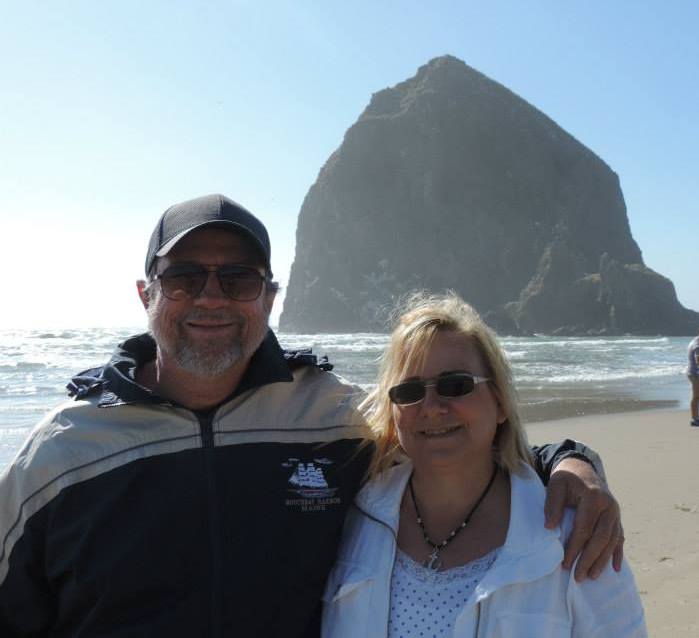 - most recent posts of my bloggy friends

Favorite Blog Parties I Link-up with


"Do not fear, for I have redeemed you; I have summoned you by name; you are mine. Isaiah 43:1

Honey for the Heart 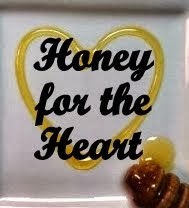 Posts that I share from the book of Psalms 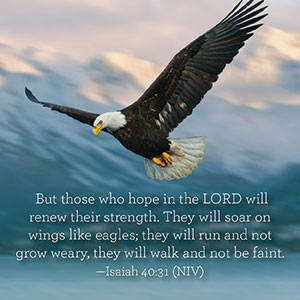 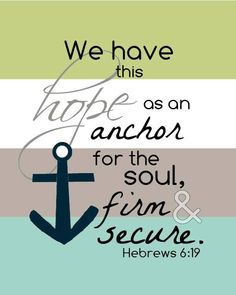